As we’ve announced at liturgy, CORPUS (an organization of resigned RC priests committed to renewal) is hosting a conference the weekend of June 6, 7, & 8.  The focus of the conference is on small faith communities, and “Spirit of Life’s own” Jim Fitzgerald will be one of the keynote speakers!!

If you haven’t seen the information before, we’re attaching it here and encourage you, if you have some time, particularly on Saturday from 4:30 - 5:30 to be available and join us for a Q & A session on community.  Feel free to give us a call if you have any questions!

"Women as Priests" in the New York Times 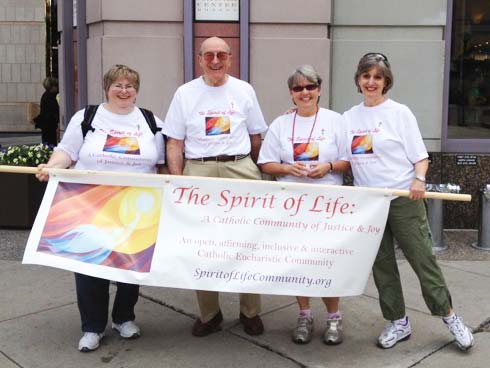 The Spirit of Life will be participating again this year at the Boston Gay Pride Parade.

Last year was great fun for all who participated and we were deeply touched by the warm welcome we received by those we met on route. The significance of our faith community's presence was clearly very meaningful for many.

We would love to invite as many people as possible to join us again this year on Saturday, June 8th.

The parade begins at noon at Copley Place and finishes at City Hall. Details regarding our gathering time to line up and transportation will follow.

Last year we all wore Spirit of Life t-shirts and we would like to offer those again for those who would like to purchase one this year. 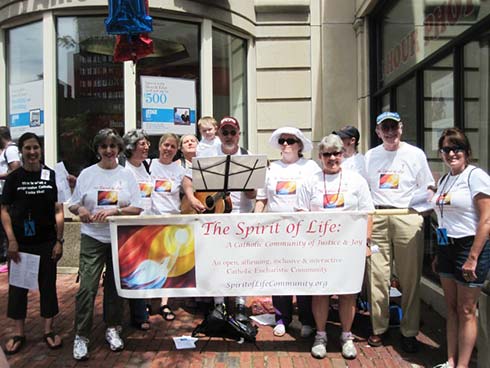 The price of t-shirts will depend on timing and available discounts, but we anticipate the price being between $9.00 and $12.00.

We can get the best price if we place our order before the end of March. If you would like to order a t-shirt please contact Cheryl or Midge by sending them email at This email address is being protected from spambots. You need JavaScript enabled to view it.

and let us know the size you prefer.

We look forward to joining this important celebration again this year and hope you can join us!

For more information on this event check out: http://www.bostonpride.org/festival/

Click here to read the news alert in PDF format.

The Women's Ordination Conference (WOC) is heartbroken to report that the Vatican's Congregation for the Doctrine of the Faith has canonically removed Roy Bourgeois from his community the Maryknoll Fathers and Brothers because of his support for women's ordination.

Fr. Bourgeois' dedication to social justice, his unwavering conscience, and his personal friendships with women called to priesthood compelled him to bravely speak out against the inequality of women in our Church. As a Maryknoll priest for forty years, he has consistently followed the gospel of Jesus by speaking out against injustice, risking everything for what he knows to be right.

I spoke with Fr. Bourgeois this morning. While he is devastated to lose his community, and saddened by the harshness of this final step, he remains steadfast in his faith and conscience. He has asked for solitude and prayers during this time of transition.

Supporters are encouraged to mail letters of support to the WOC office (P.O. Box 15057 Washington, DC 20003). In addition, Fr. Bourgeois, the dedicated activist, recommends supporters order or download a copy of his story My Journey from Silence to Solidarity and use the book as a tool to break the silence on women's ordination. Please watch for further actions to support Fr. Roy.

The following is a statement from Fr. Bourgeois. Any additional inquiries may be directed to me at (202) 675-1006.

STATEMENT ABOUT MY DISMISSAL FROM MARYKNOLL

I have been a Catholic priest in the Maryknoll community for 40 years. As a young man I joined Maryknoll because of its work for justice and equality in the world. To be expelled from Maryknoll and the priesthood for believing that women are also called to be priests is very difficult and painful.

The Vatican and Maryknoll can dismiss me, but they cannot dismiss the issue of gender equality in the Catholic Church. The demand for gender equality is rooted in justice and dignity and will not go away.

As Catholics, we profess that God created men and women of equal worth and dignity. As priests, we profess that the call to the priesthood comes from God, only God. Who are we, as men, to say that our call from God is authentic, but God's call to women is not? The exclusion of women from the priesthood is a grave injustice against women, our Church and our loving God who calls both men and women to be priests.

When there is an injustice, silence is the voice of complicity. My conscience compelled me to break my silence and address the sin of sexism in my Church. My only regret is that it took me so long to confront the issue of male power and domination in the Catholic Church.

I have explained my position on the ordination of women, and how I came to it, in my booklet, My Journey from Silence to Solidarity. Please go to: www.roybourgeoisjourney.org.

Women's Ordination Conference (WOC), founded in 1975, is the oldest and largest national organization that works to ordain women as priests, deacons and bishops into an inclusive and accountable Roman Catholic Church. WOC represents the 63 percent of U.S. Catholics that support women's ordination. WOC also promotes perspectives on ordination that call for more accountability and less separation between the clergy and laity. For more information, visit www.womensordination.org